A Study on Video Games and Heart Rate

The study that is most commonly cited for this response was done at Stockholm University’s Stress Research Institute by Malena Ivarsson. The title of the research paper is called “The Effect of Violent and Nonviolent Video Games on Heart Rate Variability, Sleep, and Emotions in Adolescents With Different Violent Gaming Habits.”

In the study, it was discovered that there is a correlation between playing violent video games and your heart rate. The study comprised  of thirty boys between the ages of 13-15. The thirty boys were divided into two groups. Group 1 was expected to play a violent video game for at least three hours a day. Group 2 was told to play a nonviolent cartoon game for no more than one hour per day. Both groups played the games in their homes for a duration of two days. The heart rates of the group were taken during and after gameplay.

The results of the study show that the group of boys that played violent video games had an increased heart rate compared to the group who interacted with a nonviolent game. What was more interesting was that results seem to show that the elevated heart rates not only lasted while the boys played the video game, but also while they slept. The group of boys who played violent video games were reported to having a poor quality of sleep, increased feelings of sadness, and more nervousness and stress at bedtime.

There have been others across the internet who will point to this study to suggest that violent video games result in an increased aggressive behavior, but that is not a fair way to interpret this study. It is true that other studies have shown that violent video games can lead to an increase in adrenaline, higher blood pressure, and increased breathing rate, but none of these (including increased heart rate) are directly correlated to a person being violent.  In my opinion – this is too far of a stretch to make with these studies. The study does show a higher heart rate, but how would a higher rate transform a person into a violent aggressor?

A Few Thoughts from a Gamer

I am glad that a study has been done on this, but for most gamers the outcome was expected. If you play a couple hours of Halo, Fortnite, Call of Duty, or any other game with shooting, action, and competition you don’t need a doctor to tell you that your heart rate has increased. How many times have you been in the thick of the action in a video game and you think you can HEAR your heart beat? We’ve all been there.

The most I ever felt like my heart was beating incredibly fast was while playing VR (Virtual Reality). My friend purchased the HTC Vive a year ago, and many of the games force you to move around. There’s one game in particular, Hover Junkers, that involves shooting incoming waves of drones. To survive you must duck, dodge, kneel, shoot, and if you’re me…dive. Twenty minutes into this game my heart was beating at a good clip, and I felt like I was getting a decent workout in. In fact it may be one of the few times where I began to sweat while playing a video game due to the amount of movement I was making. While an elevated heart rate doesn’t always mean an equivalent of calories are being burned – I believe that my VR playing experience resulted in a few calories being used.

To me the question of: “how do video games affect your heart rate?” should be framed in the larger picture of being a healthy gamer. Do you love video games to the point that your social, mental, and physical health are deteriorating? Are you sacrificing your general health for the pleasure of playing video games? If the answer to that question is a definitive YES than it’s time to put down the controller and begin to work on becoming a healthier you. My assumption is that if you’re worried about your heart rate than there might be a bigger issue at hand. 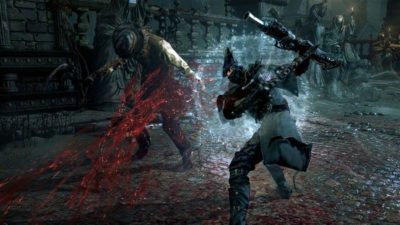 Want to sleep well? No Dark Souls Before Bed

The big takeaway from this study for me (and hopefully you) is that playing violent video games before you go to bed isn’t going to promote deep sleep. If you go from gaming action to slipping into your bed it is unlikely that you’ll be getting that deep REM sleep you’re hoping for. This isn’t to say you should never play violent video games before bed, but that you shouldn’t expect deep sleep. If you want to prioritize sleep perhaps it would be better to switch playing Wolfenstein with Stardew Valley. Games that are more calming and peaceful while still capable of increasing your heart rate won’t raise it very high.