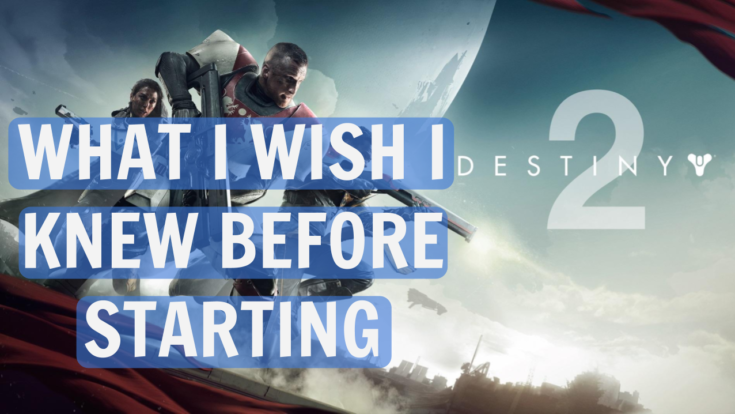 Destiny 2 has now been fully released for X-Box, Playstation 4, and PC. It’s a beautiful game that has plenty of content for the hardcore gamer. There’s PvP, Story Mode, Strikes, and more! Whether you’re new to the Destiny video game franchise or this is your first time, we put together this list of Destiny 2 tips to help you be the best you can be at Destiny 2. Each one of these Destiny 2 Tips are things that I wish I knew before I started Destiny 2. I learned them later on, but figured I could share them to help other beginners! I hope these Destiny 2 tips help!

1) You can only equip one exotic weapon and one exotic piece of armor at a time.

The moment you discover your first piece of exotic loot you’ll start fantasizing about being covered from head to toe in exotic gear. The way that Destiny’s gear/weapon system works doesn’t allow this. They have created the game to only allow for one exotic weapon and armor to be equipped at a time. Choose which exotic weapon and armor you’ll wear wisely!

2) There’s a cap on how much Glimmer you can hold – so start using it!

You can only hold 99,999 glimmer which may seem like a lot at first, but you’ll actually hit the cap fairly quick. You receive glimmer from killing monsters, breaking down weapons, opening loot chests, completing patrols and more. Prior to level 20 you should spend your glimmer on any weapon/armor that a vendor has that’s better than what you have equipped. Might as well spend the cash on something that will make you more powerful.

Once you’ve hit level 20 the best way to spend Glimmer in Destiny 2 is to purchase random mods from the Gunsmith. The other way you can spend glimmer is by purchasing scout reports and treasure maps from Cayde-6. These can help you find hidden chests throughout the planets of Destiny 2 which lead to more glimmer and powerful gear.

Throughout the missions and story of Destiny 2 you’ll come across large mobs of Taken, Fallen, and Cabal. If you look carefully you’ll often notice a red can (sometimes yellow) sitting around. Fire away at these explosive cans to do massive damage to enemy mobs. You’ll be surprised by how OP these explosive cans are. This Destiny 2 tip will make some missions WAY easier.

Did you just purchase Destiny 2 and you’re ready to play co-op with a friend? Hold your horses! The first hour and a half of Destiny 2 are completely solo. There’s lots of videos, lots of setting the foundation of the story, and you’re only allowed to do it solo. If you’re excited to play with a friend make sure you set aside time to get through the intro first!

Each Guardian (Titan, Warlock, Hunter) will gain access to three subclasses. You’ll need to progress the story to gain access to your 2nd and 3rd subclass. As you look at the skill tree you’ll notice that you can use upgrade points to unlock abilities and subclass upgrades.

Upgrade points can be gained through completing adventures, leveling up, and missions. The good news is that it’s possible through lots of grinding and playing to unlock every single subclass skill and upgrade. With this said, it becomes much more of a grind once you hit level 20. We’d recommend not wasting all your upgrade points until you’re sure which subclass you’ll be primarily playing and ensuring you unlock the skills you want before blowing your upgrade points on other subclasses.

Did you just loot an engram, but you’re thinking of not decrypting it until you’re a higher level? Don’t do this. Decrypt it now. The power level of an engram is determined the moment they’re dropped, and so waiting to decrypt until a higher level does nothing towards increasing the chance of your loot being a higher level.

Looking for Destiny 2 merchandise for yourself or a friend? Check out the best Destiny 2 Merchandise here!